As an Amazon Associate I earn from qualifying purchases.

Whether a newborn is the first child or fifth in the family, realizing that it is colicky may cause more stress in young parents than any other thing encountered. Colicky babies cry more than three hours per day more than three days per week during their first three weeks of life. Some researchers claim colic is caused when newborns swallow excess air when eating while others insist it is the result of digestive systems going into spasms as they begin to work. Regardless of the reason, it has been found that the type of bottle used makes a huge difference. A review of what’s currently on the market at Amazon.com may make the choice more clear. 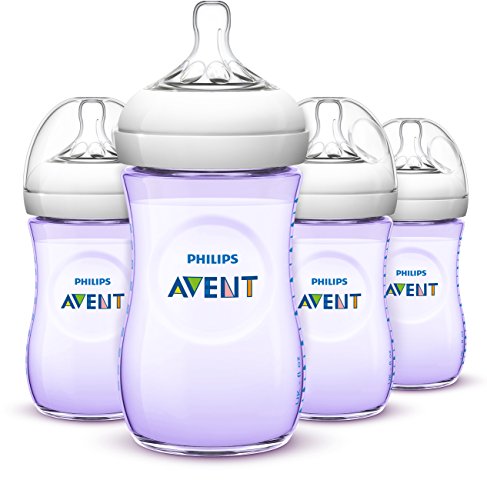 Philips Avent Natural Bottles come in a soft purple color. The best thing about this bottle is the nipple. It is wide replicating a mother’s breast which makes it easier for babies to latch on. Two integrated valves are also built into the nipple in order to allow excess air to vent before it gets into a baby’s stomach thus reducing problems such as colic. Best of all, a petal is added inside the nipple to prevent collapse yet ensures it remains soft and flexible. The bottle itself has a wide mouth and is marked to allow for accurate measurement. Reports from parents indicate that it is well-made with one flaw that can cause leaks. 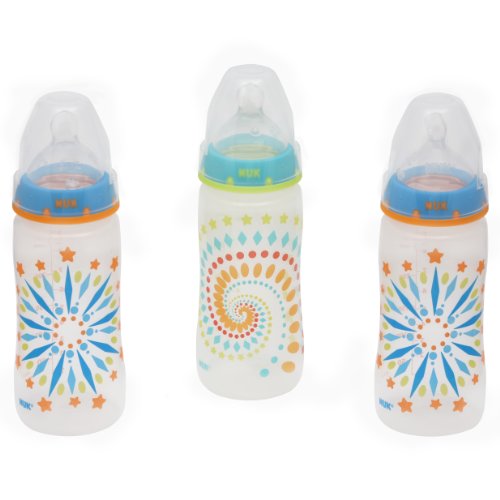 The NUK-14074 Elephants Bottle with the Perfect Fit Nipple is one of the more expensive options. An anti-colic air system silicone nipple has no extra parts to clean and is shaped just like a mother’s nursing nipple which is why it’s called the Perfect Fit. The design makes it easy for the baby to latch onto while reducing colic, spit-ups, and gas. The bottles are BPA (Bisphenol A)-free, dishwasher safe and leak-proof. The nipple also has a soft satiny finish that conforms better to a baby’s palate. There have been reports of an odd herbal/medicinal smell after they are used for a few days and if the bottle is tipped up too high milk will leak out.

Gerber Essentials Clearview Bottles with Silicone Nipples has the distinct advantage of fitting most breast pumps. By attaching the bottle directly to the pump, containers can be filled directly thereby eliminating the step of transferring milk into a bottle at a later date. Silicone nipples are vented in order to reduce the amount of air the baby swallows and vent holes prevent collapse. Parents have reported that they have a tendency to leak through the nipple and rim, however.

Dr. Browns Original Newborn Feeding Bottle has been on the market since 1996 and has proven to be an effective anti-gas, anti-colic and anti-fuss option for busy mom’s. What makes them unique is the two piece venting system that eliminates the vacuum that usually forms in bottles as the baby suckles. Instead, the system creates a positive pressure flow just like a human breast. They work out extremely well for moms that need to switch from breast to bottle or are switching to bottle feeding only. New to the line is a BPA-free plastic option rather than only glass. The result is a more affordable version that won’t break. The only downside is that the plastic option is difficult to find. Additionally, the vent system can be a pain to clean even though in the end it’s totally worth it. Compared to the competition, however, it was one of the best bottles at reducing colic and gas. 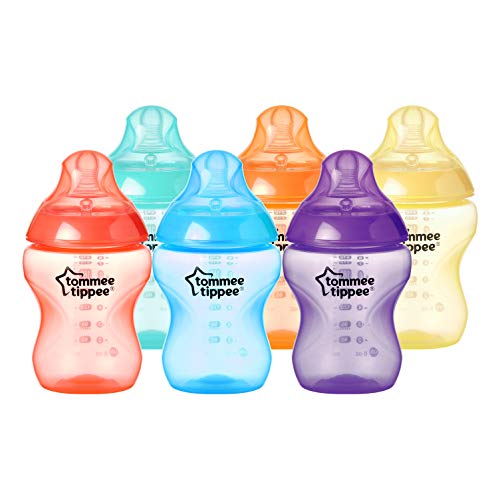 Tommee Tippee Closer Nature Fiesta are a colorful alternative to clear plastic bottles. Bright colors were utilized specifically because they are an essential part of how babies see and make sense of the world. The bottles also have a super-sensitive Easi-Vent valve that stimulates a baby’s innate feeding action in order to generate a relaxed, easy feeding session. The easy latch-on nipple is shaped with the natural movement, stretch and flex of a mother’s breast in mind. Additionally, an optimum venting valve combined with the slow-flow nipple minimizes air intake to reduce discomfort. The only downsides found were the fact the bottles were plastic and occasionally leaked. 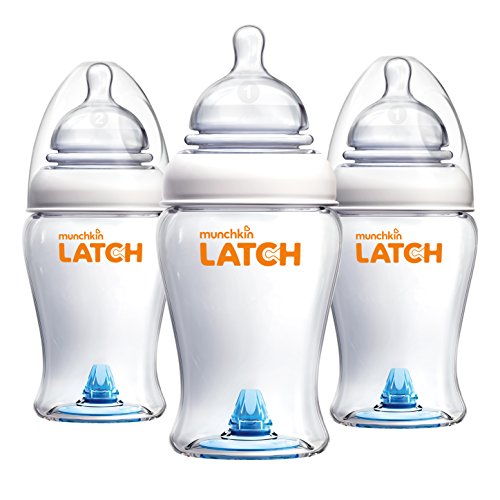 The Munchkin Latch BPA-Free Bottle in 4 and 8 Ounce sizes is one of the bottles on the market that replicates breastfeeding so well that the transition between breast and bottle is effortless. Not only does the accordion-shaped nipple move and pump like a mother’s breast but it also stretches to fit neatly into the baby’s soft palate. That factor ensures a correct latch. The one-piece anti-colic valve also makes certain that air does not travel through the breast milk and into the baby’s stomach which reduces the chance of stomach upset. The only disadvantage reported was that air kept making squeaking noises in the corners of the babies mouths while they were feeding. 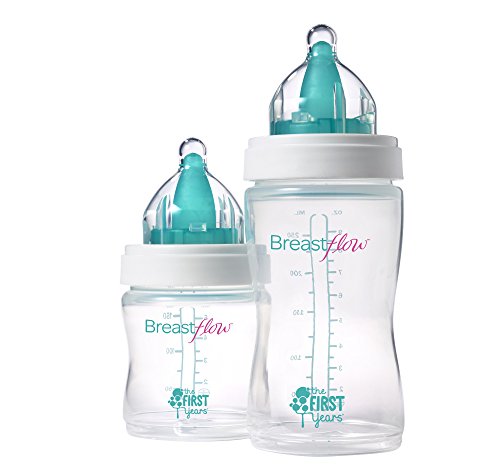 First Years Breastflow Starter Set in Blue is considered the perfect travel set especially for newborns. It has a patented 2 in 1 nipple design that not only allows the baby’s tongue to stay in the same position as when breastfeeding but also ensures the baby can control the flow of milk naturally. The set comes with 3 sizes of bottles, a snap-on container for formula or snacks and a bottle brush. Some reviews by parents indicated that the bottles had a tendency to leak and were difficult to clean. 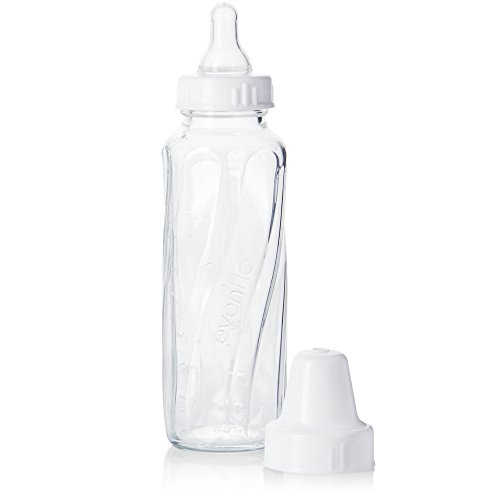 Evenflo Feeding Classic Glass Bottles are made of tempered glass that are more resistant to breakage than many competitors. They are best used between the ages of 0 and 2 months as they come with a slow-flow nipple that has micro-vents that minimize the chance of air bubbles mixing with the milk. The design helps reduce the chance of babies becoming colicky or suffering from other types of feeding problems. Perhaps the best part about these bottles is the fact they are easy to clean, sanitize and recycle. The only downside found was that the angled bottles made it easier for babies to swallow too much food in a single feeding which upset their stomachs. 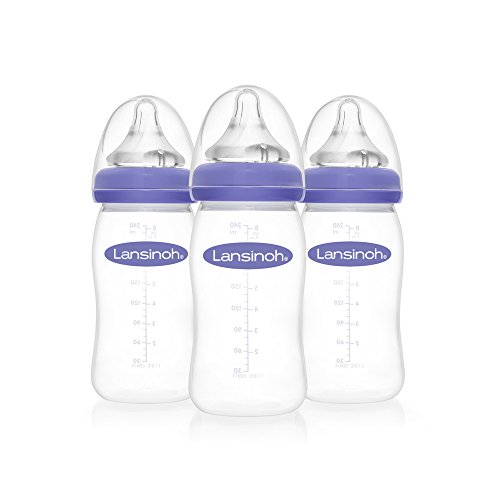 Lansinoh Breastmilk Feeding Bottle by Natural Wave is specifically designed to imitate the suckling actions of babies when on their mother’s breast thereby avoiding nipple confusion when switching from breast to bottle. The system has few parts with an air ventilation system that minimizes unnecessary gas. The air valve does make loud noises occasionally and the slow flow nipple may not be as slow as anticipated but it’s easy to clean and is BPA and BPS-free. Reports indicated that the downsides were internal nipples that made them more difficult to wash and that they had a tendency to leak.

Playtex Baby VentAire Colic Bottle has a unique design in that small vents along the bottom allow air to escape before it can mix with the milk thus reducing the chance of colic. The angled designed is recommended by pediatricians because research has found that it reduces ear infections. It’s also really easy to clean. The only downside found is that they are not readily available in retail stores.

A baby’s bottle is one of the most important purchases that will be made especially if he or she suffers from colic or other types of intestinal problems. There are many options currently on the market today and what works well for one baby may not work for the next. Although the Playtex VentAire appears to have the least reported problems, new parents should be open to the choices available. Amazon.com is a great resource that will not only have a variety of products to choose from but also has parent reviews on each one. A decision should be made only after careful consideration.